English Championship club, Cardiff City, has announced the signing of Nigerian Sheyi Ojo on a season-long loan deal from Premier League side Liverpool.

Cardiff confirmed the acquisition of the striker on Monday September 7th after successful medicals, and he becomes the third summer signing of the club following the arrival of Kieffer Moore and Jordi Osei-Tutu. 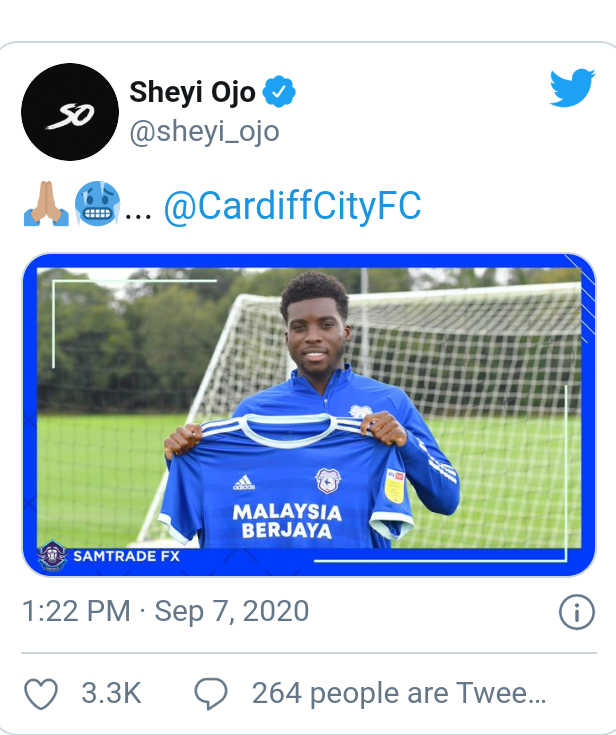 “Cardiff City is a massive club with great fans and great players – hopefully I can show what I can do here and fit right in.

“Wherever the ball is, I want to be involved in the game as much as possible. I’m delighted to get here in time for a full week’s training with the team ahead of the first home game this Saturday. Now it’s important that we start right.”

Cardiff is Ojo’s sixth loan spell away from Liverpool, having also played for Wigan Athletic, Wolverhampton Wanderers and Fulham in England.

He also featured for French side Reims before he teamed up with Scottish Premiership club Rangers last summer.

Ojo has been with Liverpool since 2011 when he signed for the Premier League giants from Milton Keynes Dons, a club he joined at the age of ten.
He has played for England at U16, U17, U18, U19, U20 and U20 levels but he still eligible to play for Nigeria.