US President, Donald Trump on Wednesday morning September 2, called on CNN to fire its popular host, Chris Cuomo, after the anchor was heard denying apparent sexual-misconduct allegations on a secretly recorded audiotape amid a conversation with former Trump lawyer Michael Cohen.

The tape begins by Cuomo, the brother of New York Governor Andrew Cuomo, allegedly being heard telling Cohen: “I’m always careful when I talk to media, you know. “Do you know how many f**king phone calls I’ve gotten from people at ABC who say that reporters are calling and lying about me and trying to get stories about me when I was at ABC?

“Guys calling and saying, ‘I heard he was the Charlie Rose of ABC, he used to invite women to his hotel and open his bathrobe.’

“Do I look like the kind of f**king guy who’s gotta do that?”

Cohen allegedly quipped, “Sure, why not?”

Cuomo continued to fume: “Women who do work there saying, ‘Oh yeah some of these men’ – naming me with other guys – ‘you know we bumped into each other once in the elevator and he put his hand on my shoulder and made me really uncomfortable,’ I mean what the f**k.”

Cuomo allegedly concluded: “I’m careful with the media always, I’ve always told you the media is not your friend.”

It is not yet clear when the audio was recorded, nor how it was obtained.

Trump tweeting on Wednesday said: “Will Fredo be fired by Fake News @CNN?
“He speaks with great disrespect about women, and it will only get worse. Fredo’s Ratings are bad, so this is the time,” the president wrote.

“Always terrible to speak to sleazebags, especially when you are being recorded. CNN has no choice, Fredo must go!” 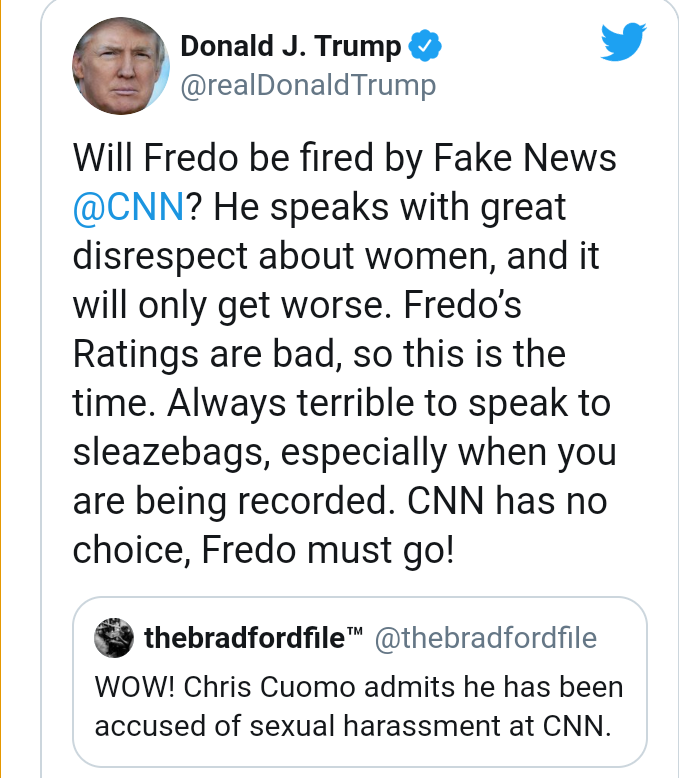