IBF, WBA and WBO heavyweight champion, Anthony Joshua has blasted heavyweight rival, Tyson Fury, saying it took him so long to fight for a world title.

According to Joshua, he is not scared of the unbeaten Fury as his rival’s ”career could be approaching its end.”

Joshua went from being an Olympic gold medallist at London 2012 to a world champion just four years later but lost his unbeaten record and titles to Andy Ruiz Jr. 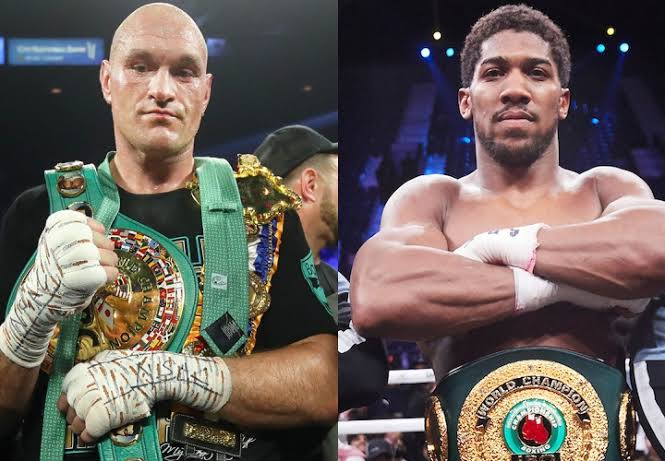 “Fury has been professional much longer than me. He should be looking to retire soon,”  Joshua told Sky Sports on Tuesday morning, September 8.

“If he wants to cement his legacy, I’m here and ready. I’ve built myself into this position.”

Joshua and Fury have agreed financial terms to two fights in 2021 that would decide the division’s undisputed champion.

But before they both fight, Joshua must defend his belts against mandatory challenger Kubrat Pulev, expected in December, while Fury is contracted to a third meeting with Deontay Wilder this year too.

“I’ll challenge Fury, I’ll challenge Wilder,” said Joshua. “These guys aren’t the biggest names that I’ve fought on my record anyway. They are just another heavyweight.

“Look at my record. They are not the best fighters that I have challenged.

“When they are ready, I’m here to fight.”

“I came up quick. That shows I’m ready. These boys turned professional in 2008 and it took [Fury seven years] to fight for the heavyweight championship of the world,” said Joshua.

“He’s on a completely different journey. I want to steam through.

“I haven’t got fear of Fury – whether he’s got a better chin than me, a better jab than me, whether he’s all of this stuff that people say. So be it. Let me go in there and prove myself. Show you who I am and what I can do.

“I’ve fought five champions and been in two unification fights. I’m a two-time heavyweight champion in the space of 24 fights and a [seven-year] career. It shows you I am serious.

“If Fury is serious, I’ll take that fight seriously too.”