Israeli Prime Minister Benjamin Netanyahu has denied corruption charges in court for the first time as his trial resumed in Jerusalem on Monday, February 8.

Netanyahu who is the first serving Israeli prime minister to go on trial,
entered his plea at the hearing which had been previously postponed because of the coronavirus pandemic.

The trial of Netanyahu, 71, takes place just a month before elections.

He is accused of bribery, fraud and breach of trust in three separate cases.

Case 1,000 – Fraud and breach of trust: he is accused of receiving gifts – mainly cigars and bottles of champagne – from powerful businessmen in exchange for favours.

Case 2,000 – Fraud and breach of trust: Mr Netanyahu is accused of offering to help improve the circulation of Israeli newspaper Yediot Ahronot in exchange for positive coverage.

Case 4,000 – Bribery, fraud and breach of trust: as PM and minister of communications at the time of the alleged offence, Netanyahu is accused of promoting regulatory decisions favourable to the controlling shareholder in the Bezeq telecom giant, Shaul Elovitch, in exchange for positive coverage by Mr Elovitch’s Walla news site

Hundreds of protesters gathered outside the district courthouse ahead of the prime minister’s brief appearance on Monday morning, waving banners and calling for him to resign. 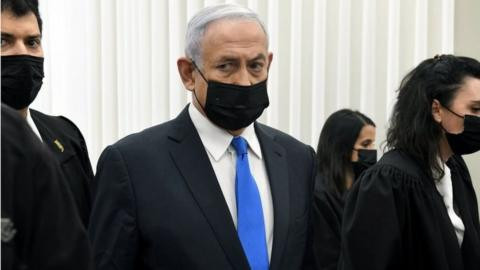 The prime minister arrived for the hearing wearing a black protective mask.

Inside the courtroom, the Isreali strong man rejected the charges, before departing within 45 minutes while his lawyers continued deliberations.

He called the charges a “witch-hunt” by political opponents, and has vowed to clear his name.

Even if he is convicted and is still in power, Netanyahu will not be required to resign unless and until any appeals are exhausted – which could, in theory, be many months or years into the future.