Openly gay Hollywood actor best known for his role in hit Tv series, Empire, Jussie Smollett, has come out to speak for the first time about the controversy surrounding his alleged 2019 attack in a rare interview.

The former Empire actor, 38, appeared in an Instagram Live conversation late Wednesday night with author and activist Marc Lamont Hill, during which he opened up about his ongoing court trial.

He pleaded not guilty to allegations that he lied to police about the incident, which authorities later claimed he had staged with two acquaintances to draw attention to himself and increase his salary in the hit show Empire..

Later that same month, the charges against Smollett were dropped by the office of Cook County State’s Attorney Kim Foxx.

Later in February,  the case was revisited and Smollett pleaded not guilty to a six-count indictment. Smollett has consistently denied any wrongdoing as the case countinues in court. 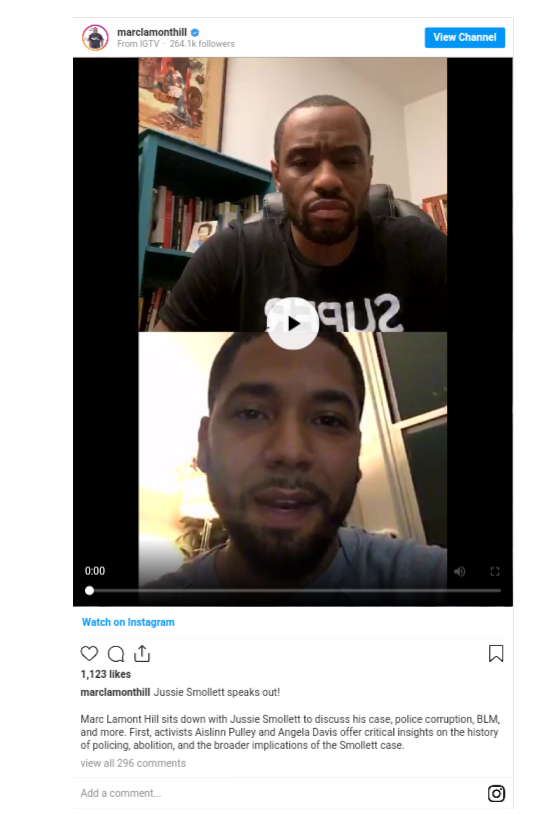 Smollett said the situation has been “frustrating, to say the least,” when he joined about 40 minutes into Hill’s hour-long livestream.

“It’s been beyond frustrating, and I certainly am not going rogue,” he said about publicly commenting on the case.
“I’m still taking the advice of my attorneys and everything like that, but I don’t really see, honestly, what staying quiet has really done, like, where it has gotten me. … It’s so much bigger than me.”

Smollett said that what has happened to him over the past two years has “humbled me.”

He claimed that his legal team filed a motion against his indictment that will be reviewed today Thursday, September 10 in court.

“I believe I have to give it up to God,” the actor said, though he admitted he doesn’t think he would succeed.

He later addressed claims that he orchestrated the hate crime to garner attention :

“From the very, very beginning, it was set up to seem like I was lying about something or everything.”

Smollett added “there would be no reason for me to do this” and “this is bulls—,” “The last thing i want to do is be portrayed as a victim.”