England manager, Gareth Southgate has axed Manchester United captain, Harry Maguire from the England squad after he was found guilty of assaulting police, verbal abuse, and attempted bribery following a brawl at the Greek holiday island of Mykonos.

The England international, 27, was convicted of all charges on Tuesday and was handed a 21 month and ten-day sentence suspended for three years by a court on the island of Syros, in Greece.

Maguire’s brother, Joe who plays for non-league team Ilkeston Town, was also found guilty of assault, attacking police and attempted bribery while a third man, 29-year-old Christopher Sharman, was guilty of two assault charges and another of verbal abuse.

The pair were given suspended sentences of 13 months after being found guilty.

Southgate, who previously named Maguire in his squad despite his legal woes, said in a statement this evening: ‘In light of this evening’s developments, I can confirm I have withdrawn Harry Maguire from the England squad for the matches against Iceland and Denmark. 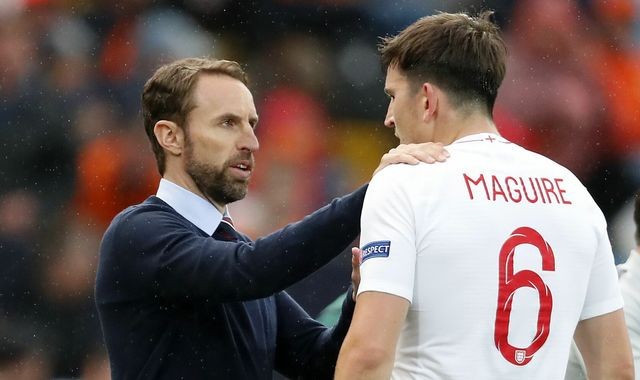 ‘As I said earlier today, I reserved the right to review the situation. Having spoken to Manchester United and the player, I have made this decision in the best interests of all parties and with consideration of the impact on our preparations for next week.’

The decision by the Three Lions boss who previously warned Maguire could be dropped ‘if facts or information changes,’ means the defender will not play in next month’s UEFA Nations League fixtures against Iceland and Denmark.