Nigerian journalist and producer for CNN Africa, Aisha Salaudeen has recalled an incident with a male colleague at a training in Nairobi.

Taking to Twitter on Friday September 5, Aisha narrated how the colleague had insisted that she poured him a cup of coffee because women serve men dilligently in “his culture”

“I just randomly remembered that a colleague insisted I pour him a cup of coffee at a training for journalists in Nairobi because “in my culture, women diligently serve men” I had to check myself out to be sure he was talking to me. Me” she wrote

Aisha further revealed that the same guy talked over her and picked a fight with her throughtout the journalism training.

“The same guy talked over me throghtout the training and picked a fight with me when I repeatedly told him I was not one to mess with. I will never not be amazed at the audacity of men.” she added. 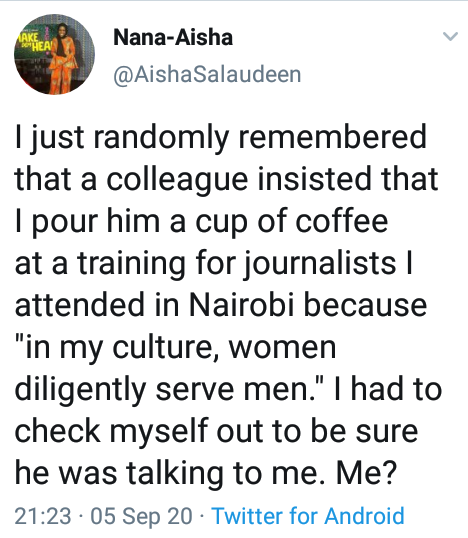