A scorned wife has publicly exposed her ‘cheating husband by putting up flyers ‘all over the city,’ but people have criticised her for involving their children in their drama.

The posters which were spotted in the US, show a family photo with a red circle around the husband, alongside his wife and their two children.

Underneath it reads: “ABANDONED his wife and kids in NY to come to RTC and screw MILFs! (and for a cr***y gov’t job!)

“Some neighbour you have! He’s still married and living with another woman.

“POLICE: Please cite him for adultery – class 4 misdemeanour according to Virginia code.” 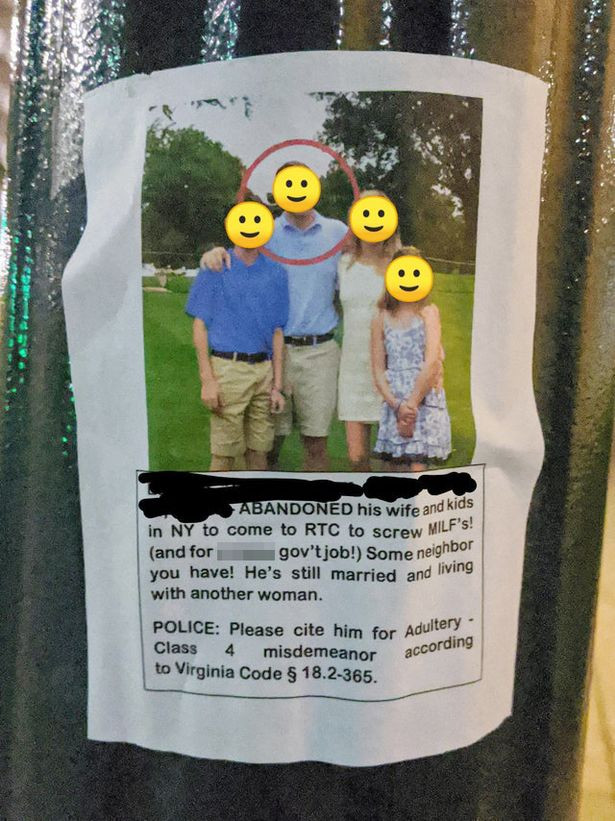 The flyer was shared on Reddit and many users condemned the woman for dragging her kids into their spat.

“I would never do this either way, but I can’t understand why she didn’t just do a giant headshot of him. I understand she wants to emphasise the abandonment of his family component, but I feel like the words would have been enough,” one person said.

And another added: “Why would she put the kids’ pictures on the flyers?! Do that to this scumbag if you wish. Considering the children’s pics are on here, I’m sure they have already been put thru hell by their parents. I get it, a lover scorned, but the kids? Really? They are both pieces of trash.”

A third agreed: “Now you have kids with dirty laundry aired to the public. It’s hard enough to have one person leaving your family and the dynamic changing. It’s worse when you have one parent actively making it even more of a hell on kids that didn’t do anything.

“Imagine how difficult school ought to be knowing they know your family drama? Or the act that your parent put revenge above your mental wellbeing? Dude is an a**hole, but the person that made the flyer isn’t less of one either.”

“I feel sorry for the kids. Dad abandons them, mum is just weird and hysterical and can’t let them mourn the loss of their father in private,” said one.

And another said: “You’re making collateral damage that could’ve been dealt with better. You’re broadcasting to the entire town, with the kids involved, that he cheated.”

Despite the hate she received, there were a few sympathetic people who could understand the wife’s actions.

Others users said the woman’s actions were understandable, arguing that: “She’ll regret it later but she must’ve been filled with absolute rage,” one said.

And another shared: “He was probably lying to her 24/7 and maintaining his persona as loving dad etc. It’s so humiliating for the betrayed spouse.”